Dear Mr. Helland,
the Honourable: School Board Members and Paliamentarian Russ Hiebert,
Representatives at Health Canada and the Offices of Canada’s Prime Minister and the Opposition Leader

Over a week has passed since I have communicated to you this, very urgent matter concerning all Canadians. Due to my error, the Prime Minister’s Office has received same with a few day’s delay.
I and the users of both my blogs internationally, and recipients of my e-lists, would like to know the official answers, more so that the Japanese authorities have confirmed meltdowns and plutonium emissions for Daiichi nuclear catastrophe, that exceeds Chernobyl’s severity many times, according to admissions by the representatives of the nuclear industry (details and references e.g. on my blogs). while there’s a blackout of information coupled with a questionable withdrawal of Canadian authorities from monitoring isotope levels in the environment.
According to the recent official rescue plan, the emissions will continue for at least another 3 months, most likely longer, judging from difficulties encountered from the beginning of the plan and the continuing threat of earthquakes. It is utterly criminal with this additional information to continue an information blackout, non-monitoring and non-advice for Canadians, perhaps the nation most exposed to the emissions, after Japan. I wonder how, in the absence of official monitoring data, claims against Canadian authorities would be judged, regarding cumulative doses received, in court cases by individuals suing for damages from the Daiichi emissions…
So far, Health Canada has replied that my query went upstairs. Mr. Helland has assured me that he is replying, asking for my snail-mail address as if not too much time has already been wasted by our leadership and bureaucracies, who have failed in protecting even the most vulnerable Canadians: pregnant and breast-feeding women, infants and children.
The same Canadian authorities have indiscriminately promoted the fraudulent 2009, “H1N1 pandemic”, by enticing Canadians to take unproven, untested and harmful vaccines against an epidemic that never was. Even with inflated statistics, the casualties of the flu are dwarfed by the fatalities and complications that have resulted from adding radioactive substances since the atomic era began. Like in the case of Daiichi, reporting, monitoring and investigation of radiation’s health effects is covered up and belied by the authorities, so we still don’t know what part of cancer deaths, for example, are due to radiation here: 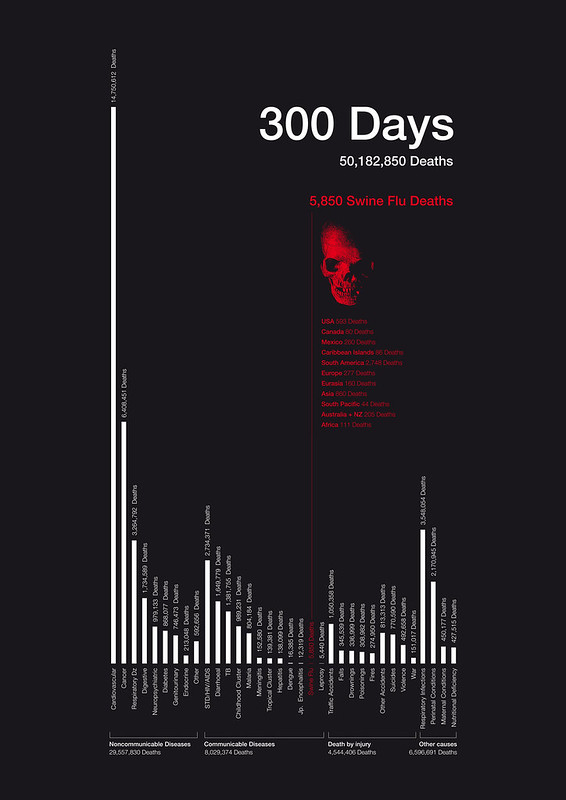 Still, after admission by the WHO who have colluded in the H1N1 hoax, making it a conspiracy of a global bio-attack, Canadian authorities have contracted a 10-year supply of flue vaccines from the same genocidal companies linked to Nazi IG Farben and Auschwitz! How good is this bio-weapon, since viruses are known to mutate when irradiated? How ignorant can the bureaucracies get on issues that the public is ahead of its government and media? Ow can anybody trust such government and bureaucracies? How dare they to hold on to their public offices? Not re-elections and tenure, but immediate resignations and life-time abstinence from public service are in order! I watched a pre-elction competiton between prime-ministerial candidates on TV — trivial issues, not a word about protecting against Daiichi and possibly another bio-attack via the contracted vaccines!
At the school level, Mr. Helland and School Board Members – are the kids still running 6 km a day? Parents of harmed ones will sue you in a couple of years – and there will be no excusing before a court, since you have been informed in time to minimize the exposure of children under your care during school hours.