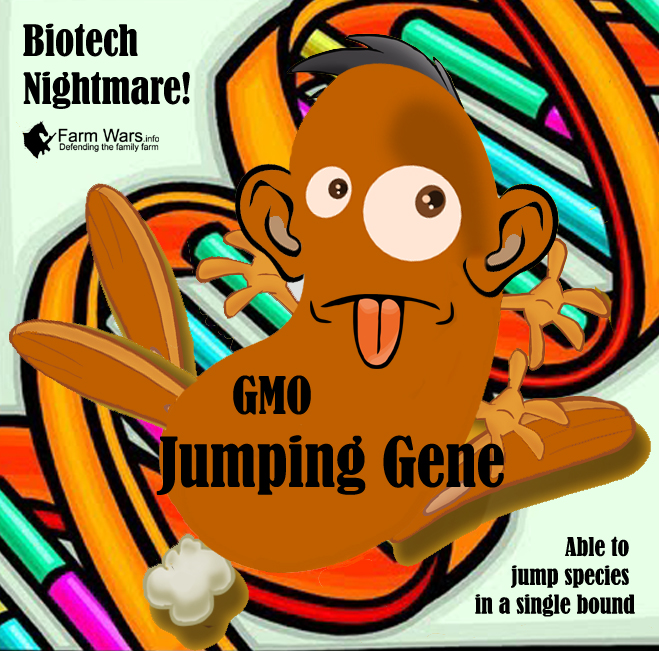 You can filter out fluoride. You can remediate radiation. You can compensate for just about every type of soil or atmospheric condition, but there is no filter or remediation technique in existence for lab-based genetically engineered organisms (GMOs).
Barbara H. Peterson
Farm Wars

They’re called transposons, mules, mobile DNA, or jumping genes, and they naturally mutate. They are in almost all species of life on planet earth.

Transposable elements (TEs), also known as “jumping genes,” are DNA sequences that move from one location on the genome to another. These elements were first identified more than 50 years ago by geneticist Barbara McClintock of Cold Spring Harbor Laboratory in New York. Biologists were initially skeptical of McClintock’s discovery. Over the next several decades, however, it became apparent that not only do TEs “jump,” but they are also found in almost all organisms (both prokaryotes and eukaryotes) and typically in large numbers. For example, TEs make up approximately 50% of the human genome and up to 90% of the maize genome (SanMiguel, 1996).
http://www.nature.com/scitable/topicpage/transposons-the-jumping-genes-518

Jumping genes ”can move from one site in a chromosome to another site in the same or a different chromosome and thus alter the genetic constitution of the organism,” and they are found naturally in almost all organisms. This is an inherent property that comprises 50% of the human genome, and they are subject to mutation.  And now, we are eating genes in our food that were actually designed to jump species, thanks to biotechnology.
Are we facing wholesale genetic mutation?

GM constructs are designed to jump into genomes. Unfortunately, they can also jump out again, to invade other genomes. GM lines are well-known to be unstable, partly because the integrated GM construct can be lost (4), and the viral promoter makes it worse.
Experiments have shown that GM genes can transfer from plants to soil fungi and bacteria. Two German geneticists monitored fields where GM sugar beet was planted (5). They found that the GM construct has persisted in the soil for at least two years after the plants were removed, and some bacteria in the soil may have taken up different parts of the construct.
http://www.i-sis.org.uk/corporation.php

Since jumping genes are already a large part of our genome naturally, and they are subject to mutation, which can lead to diseases such as cancer and hemophaelia as well as antibiotic resistance, the introduction of genetically engineered DNA into the mix is especially alarming.

transposon  (trns-pzn) [Also known as jumping gene]
A segment of DNA that is capable of independently replicating itself and inserting the copy into a new position within the same or another chromosome or plasmid. Transposons act somewhat similarly to viruses and in humans are an underlying cause of hemophilia, certain cancers, and other diseases. In other organisms, they can become a permanent and even beneficial part of the genome, as in maize corn, where transposons account for half the genome, and certain bacteria, where genes for antibiotic resistance can spread by means of transposons. Also called jumping gene.
http://www.thefreedictionary.com/transposon

Spontaneous mutation of these jumping genes cannot be controlled, especially when combined with completely foreign, unknown DNA sequences that are designed in a lab to jump species. In fact, according to Jeffrey Smith,  the tissue culture process used in genetic engineering activates transposons, and is a major factor for the resulting genome-wide mutations.
How does DNA mutation occur?

DNA replication is a truly amazing biological phenomenon. Consider the countless number of times that your cells divide to make you who you are—not just during development, but even now, as a fully mature adult. Then consider that every time a human cell divides and its DNA replicates, it has to copy and transmit the exact same sequence of 3 billion nucleotides to its daughter cells. Finally, consider the fact that in life (literally), nothing is perfect. While most DNA replicates with fairly high fidelity, mistakes do happen, with polymerase enzymes sometimes inserting the wrong nucleotide or too many or too few nucleotides into a sequence. Fortunately, most of these mistakes are fixed through various DNA repair processes. Repair enzymes recognize structural imperfections between improperly paired nucleotides, cutting out the wrong ones and putting the right ones in their place. But some replication errors make it past these mechanisms, thus becoming permanent mutations. These altered nucleotide sequences can then be passed down from one cellular generation to the next, and if they occur in cells that give rise to gametes, they can even be transmitted to subsequent organismal generations. Moreover, when the genes for the DNA repair enzymes themselves become mutated, mistakes begin accumulating at a much higher rate. In eukaryotes, such mutations can lead to cancer.
http://www.nature.com/scitable/topicpage/dna-replication-and-causes-of-mutation-409

Defects in DNA repair underlie a number of human genetic diseases that affect a wide variety of body systems but share a constellation of common traits, most notably a predisposition to cancer (Table 2). These disorders include ataxia-telangiectasia (AT), a degenerative motor condition caused by failure to repair oxidative damage in the cerebellum, and xeroderma pigmentosum (XP), a condition characterized by sensitivity to sunlight and linked to a defect in an important ultraviolet (UV) damage repair pathway. In addition, a number of genes that have been implicated in cancer, such as the RAD group, have also been determined to encode proteins critical for DNA damage repair.
http://www.nature.com/scitable/topicpage/DNA-Damage-amp-Repair-Mechanisms-for-Maintaining-344

According to Dr. Arpad Pusztai, molecular biologist, GMOs are foreign to the human body when ingested, and are treated as invaders.
Consider the following scenario:

What exactly are we opening ourselves up to with the introduction of potentially unrecognizable, genetically engineered DNA sequences designed to jump species that the body has no adequate defense mechanism for? What happens when our body’s repair mechanisms go wrong, and what happens if they don’t recognize the DNA they are supposed to repair? Are we setting ourselves up for genetic Armageddon? Like it or not, we are about to find out.