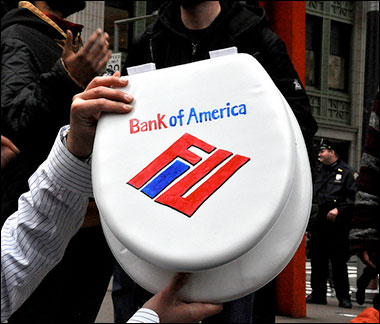 Occupy Wall Street was targeted due its popularity and the threat it posed to the elite and their financial system. Photo: Michael Fleshman
According to journalist David Lindorff, the FBI planned to assassinate the leaders of the now moribund Occupy movement “via suppressed sniper rifles.”
Lindorff cites a Freedom of Information Act (FOIA) request filed by the Washington, DC-based Partnership for Civil Justice Fund.
The redacted document obtained from the FBI in Houston states:

An identified [DELETED] as of October planned to engage in sniper attacks against protestors (sic) in Houston, Texas if deemed necessary. An identified [DELETED] had received intelligence that indicated the protesters in New York and Seattle planned similar protests in Houston, Dallas, San Antonio and Austin, Texas. [DELETED] planned to gather intelligence against the leaders of the protest groups and obtain photographs, then formulate a plan to kill the leadership via suppressed sniper rifles.

The FBI confirmed that the document is legitimate.
For the astute student of history – real history, not the massaged version proffered by the ruling elite – news of an FBI plot to murder political activists does not come as a surprise.
Recent history provides numerous examples, most notably during the 1960s and 1970s when the FBI’s COINTELPRO was in full swing.
“When congressional investigations, political trials, and other traditional legal modes of repression failed to counter the growing movements, and even helped to fuel them, the FBI and police moved outside the law,” writes Brian Glick in his book, War at Home. “They resorted to the secret and systematic use of fraud and force to sabotage constitutionally protected political activity. Their methods ranged far beyond surveillance, amounting to a home front version of the covert action for which the CIA has become infamous throughout the world.”
In addition to psychological warfare and dirty tricks, the government engaged in extralegal force and violence. “The FBI and police threatened, instigated, and themselves conducted break-ins, vandalism, assaults, and beatings,” Glick writes. “The object was to frighten dissidents and disrupt their movements. In the case of radical Black and Puerto Rican activists (and later Native Americans), these attacks-including political assassinations-were so extensive, vicious, and calculated that they can accurately be termed a form of official ‘terrorism.’”
“The FBI’s techniques were often extreme, with the agency being complicit in the murder and assassination of political dissidents, or having people sent away to prison for life,” adds Tom McNamara.
COINTELPRO terrorism “enabled the FBI and police to eliminate the leaders of mass movements without undermining the image of the United States as a democracy, complete with free speech and the rule of law,” Glick continues. “Charismatic orators and dynamic organizers were covertly attacked and “neutralized” before their skills could be transferred to others and stable structures established to carry on their work. Malcolm X was killed in a ‘factional dispute’ which the FBI took credit for having ‘developed’ in the Nation of Islam. Martin Luther King, Jr. was the target of an elaborate FBI plot to drive him to suicide and replace him ‘in his role of the leadership of the Negro people’ with conservative Black lawyer Samuel Pierce (later named to Reagan’s cabinet). Many have come to view King’s eventual assassination (and Malcolm’s as well) as itself a domestic covert operation.”
According to the official narrative, COINTELPRO was terminated in 1971, but this is obviously not the case (see my The Son Of COINTELPRO from 2002).
In regard to the Occupy Wall Street (OWS) movement, the Partnership for Civil Justice Fund (PCJF) FOIA documents reveal the program is alive and well. The “FBI was treating the Occupy Wall Street (OWS) movement, from its inception, as a potential criminal and domestic terrorist threat,” writes McNamara. The close collaboration between the Department of Homeland Security and officials in 40 different cities – first disclosed by Oakland mayor Jean Quan – in the determined (and ultimately successful) effort to destroy the largely peaceful movement demonstrates how serious the federal government is about deflecting any challenge to its monopoly on political power.
The assassination of Martin Luther King, Malcolm X, Fred Hampton, and other activists and political figures considered threats to the status quo demonstrate the viability of murder as a political tool for the elite. As Brian Glick notes, the CIA has used assassination abroad for decades and its importation into the United States simply reveals how serious they are to control any effective political opposition, especially when activism has the potential to effectuate political change or, as in the case of OWS, result in a political awakening of millions of people.