The Rise of the American Serf

By Adam English    2013-07-19
Welcome to the future, where the United States of America is doomed to pitiful growth and poverty.
The latest jobs report is out for June and the Obama administration is touting the supposedly good news…
Chairman of the White House Council of Economic Advisers Alan Krueger came out to tout the fact that “the economy has now added private sector jobs for 40 consecutive months, and a total of 7.2 million jobs has been added over that period. In spite of monthly volatility, over the past three years the pace of job growth has increased each year. So far this year, 1.23 million private sector jobs have been added.”
As usual, the press is buying into the official statements. NBC called it a political boon for Obama, stating a “revved-up economy” led to job creation. CBS said there was bipartisan praise. ABC called it steady improvement, and CNN said the job market saw a solid improvement.
And what is all this good news getting the droves of newly-employed American people?
Most likely, a lifetime of serfdom.
All Jobs Aren’t Equal
Read a few lines into the latest report from the Bureau of Labor Statistics, and you’ll quickly catch on to the real story…
The total net gain of jobs was 195,000. Most reporters conveniently stopped there, missing the fact that part-time jobs went up 360,000.
The 28,059,000 total is an all-time record high.
This in spite of the fact that the employment-to-population ratio is not recovering, and the labor participation rate is still absurdly low — and trending downwards: 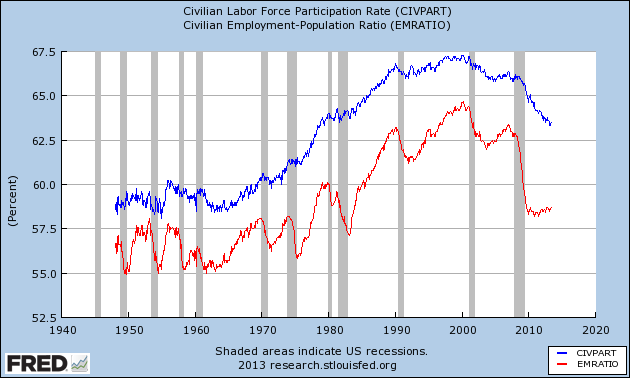 I’m sure you noticed the troubling jump in part-time workers far exceeds the total new jobs. After everything is factored in, the U.S. workforce just lost 240,000 full-time jobs during the month of June alone.
So far in 2013, only 130,000 full-time jobs have been added, as opposed to 557,000 part-time jobs.
Since the recession officially began in December 2007, there are 5.8 fewer full-time jobs and 2.8 million more part-time jobs.
Even the Federal Government is on trend: In June 2012, 58,000 federal workers were part-timers. This year, that figure has more than doubled to 148,000.
In all, 322,000 of the part time-workers are looking for full-time work, but cannot find it. This has created a new all-time high of 8.2 million for this category as well.
There are now one million people that have given up trying to find work because they believe there are no jobs for them. That makes for an increase of more than 206,000 from a year ago.
These people will be able to barely feed and house themselves in what are often temporary jobs with no chance of promotion, wage growth, or benefits.
Bottom line: The 195,000 added jobs is the silver lining to a dismal picture of the “American recovery” — not news to be applauded or a reason to pat the president on the back.
Perpetual Poverty
Dig deeper in the Bureau of Labor Statistics website, and you may just find this report.
The author of the report used data to compare wage and non-wage compensation within the same establishment and occupation. One job was part time and one was full time. Data was pulled from a broad range of 465 occupations, with 443 of them having two or more sets of data.
With wages stagnant since it was released, the conclusion will still be accurate…
The report shows the reality of where wages are going in this country: Within the same or similar job, part-time workers receive 10% to 30% less wages.
No wonder 76% of Americans are living paycheck to paycheck. 50% of have less than a three-month cushion. And 27% had no savings at all.
Here’s a terrifying statistic: 46% have less than $800 in savings, while 22% have less than $100 to their name.
That just leaves credit (if it’s even available!) to cover even minor things like car maintenance, doctor visits and perscriptions, and unexpected needs.
At a 14.95% average interest rate for credit cards, this guarantees a downward spiral into destitution.
This is what the media and the Chairman of the White House Council of Economic Advisers are celebrating?
Don’t Expect Any Changes
I expect this trend to hold for years to come, and for a true recovery to never truly manifest.
Over the four years since the “recovery” started, the country has had an average GDP growth rate around 2%. After previous recessions, GDP growth averaged 4.1%.
With the largest stimulus and monetary base expansion in 75 years and fiscal deficits over 10% for four years, this is as good as it is going to get for a while.
This depressing jobs report is our future.
Even with ObamaCare regulations and penalties being kicked down the road to 2015, we’re seeing the unintended consequences already…
The law will require any employer with over 50 employees to provide health insurance or pay a $2,000 penalty per worker. Full-time jobs are defined as 30 hours a week.
As a result, the law is effectively encouraging small employers to hire part-time workers and only give them 29 hours of work a week to maintain the razor-thin margins that keep their small business in, well, business.
These employers need the workers to be available for flexible shifts, meaning many have to require full-time availability from the employees. So workers cannot take a second job (if they can even find one) without endangering their first job, capping the hours they can work and money they could potentially earn.
In the long term, things get even worse…
As ObamaCare virtually forces small businesses to only hire part-timers, young workers entering the labor force are going to lose any chance to advance and gain skills needed to transition to better jobs.
Already 53% of recent college graduates under 25 are unemployed or underemployed. A salaried employee is estimated to cost a business 1.5 to 3 times the employee’s salary after benefits, taxes, training, and all other costs are factored in.
Who will want to hire them full-time with gaps in work history, coupled with the knowledge that the new worker will quit when another job presents itself and the business will have to take a hefty loss?
These are the kinds of questions our national economic policies and laws have created.
They are devastating our current job market and making the jobs of the future only suitable for subsistence living.
Five years of the same flawed policies are creating a phony recovery that helps no one other than those entrenched in positions of power.
Welcome to the rise of the American serf, courtesy of your smug, self-congratulating leaders.
Take Care,

@AdamEnglishOC on Twitter
Adam’s editorial talents and analysis drew the attention of senior editors at Outsider Club, which he joined in mid-2012. While he has acquired years of hands-on experience in the editorial room by working side by side with ex-brokers, options floor traders, and financial advisors, he is acutely aware of the challenges faced by retail investors after starting at the ground floor in the financial publishing field. For more on Adam, check out his editor’s page.

America: In Debt and Depressed
An analysis of the financial soundness and happiness of ordinary citizens will show you the course we’re on is obviously not a good one.
EXCLUSIVE: Peter Schiff Interview
The Fed won’t taper QE. They’ll just rev up the engine until it implodes.
The American System is Weak
Signs that “the system” as you know it is weak are everywhere.