The headline above is certainly not the one that the Fukushima troubleshooters in Tokyo wanted to read. Nevertheless, the photos of the ‘mutant daisies’ shown below, which were taken at a location 65 miles from the nuclear disaster site, do not lie. Both TEPCO and the Japanese government now have An Additional Crisis to deal with.

“‘The images, posted in May by Twitter user @san_kaido of Nasushiobara City, located about 65 miles from the disaster site, show common daisies that appear to have been affected by radiation exposure, oddly fused together like Siamese twins, reports the Weather Channel.’”1

Still, there are very few who are aware, after more than four years since the Fukushima nuclear catastrophe which occurred in 2011, that three separate meltdowns actually took place. Consequently, there are various vectors of dissemination of nuclear radiation which continue to ooze from the disaster site. Not only is contaminated water continually released into the Pacific Ocean, but the groundwater around Fukushima has also been adversely affected.

Because of the geological formation that the Fukushima Power Plant was constructed upon, there are opportunities for wastewater to enter the water table. Once this occurs, the contaminated water will move through natural conduits made up of myriad fissures, cracks, and crevices in the surrounding geological formations. Ultimately, this radioactive water can make its way to a great distance many miles from the nuclear plant.

There is also speculation about the hydrological cycle recirculating ionizing radiation during 2011.

Because of the nuclear explosion at Fukushima in March of 2011, the airborne radioactivity became vulnerable to being rained back down to the ground, as well as carried to different parts of Japan via the changing wind patterns. Given that wind and rain will always deliver their invisible contents on the land below, it is easy to understand how the vegetation becomes susceptible to such radioactive assaults.

“‘The right one grew up, split into 2 stems to have 2 flowers connected each other, having 4 stems of flower tied beltlike,’ according to Fukushima Diary. ‘The left one has 4 stems grew up to be tied to each other and it had the ring-shaped flower. The atmospheric dose is 0.5 μSv/h at 1m above the ground.’”1 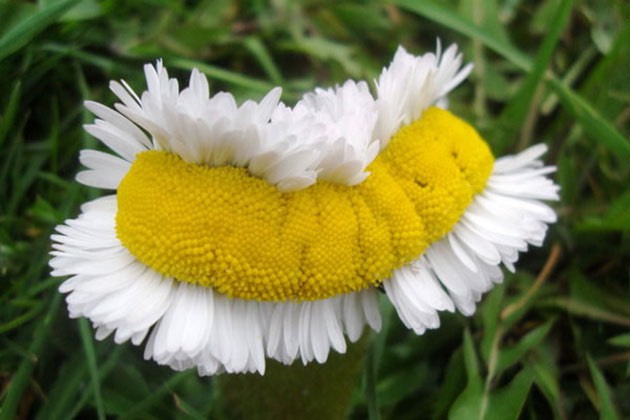 Flowers and other foliage are particularly delicate and sensitive to damaging effects of radionuclides. Because of their fragility, flowers are much more apt to express genetic mutations which have occurred after exposure to gene-altering radiation. The above photo captures the profound alteration in genetics which necessarily precedes such dramatic examples of deformed daisy flowers.

Fasciation is not normal and is quite rare, often owing its occurrence to genetic mutation

The phenomenon that the ‘mutant daisies’ are manifesting is sometimes known as fasciation.2 Its occurrence in daisies near the contaminated Fukushima disaster site may reflect the degree of pervasiveness of radioactivity. Fasciation can also occur as a result of a hormonal imbalance, which more than likely results from a genetic mutation transpiring at a critical point of the plant’s development.

“Fasciation (or cresting) is a relatively rare condition of abnormal growth in vascular plants in which the apical meristem (growing tip), which normally is concentrated around a single point and produces approximately cylindrical tissue, instead becomes elongated perpendicularly to the direction of growth, thus, producing flattened, ribbon-like, crested, or elaborately contorted tissue.”2 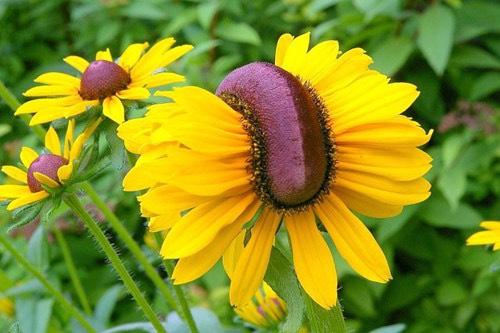 The Fukushima nuclear disaster has functioned as a major wakeup call to not only the people of Japan, but to the American people as well. Above all else, this ongoing catastrophe has grimly revealed the reflexive negligence on the part of both governments and corporations where it concerns informing the public of health hazards and environmental risks associated with radioactive fallout.

Perhaps the responsible government agencies never anticipated that the flowers themselves would eventually expose their failure to warn the citizenry of nuclear contamination. Because Tokyo is only a mere 175 miles from the Fukushima nuclear power plant, they dared not risk a mass exodus from the largest metropolitan population in the world.3 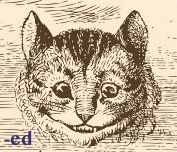