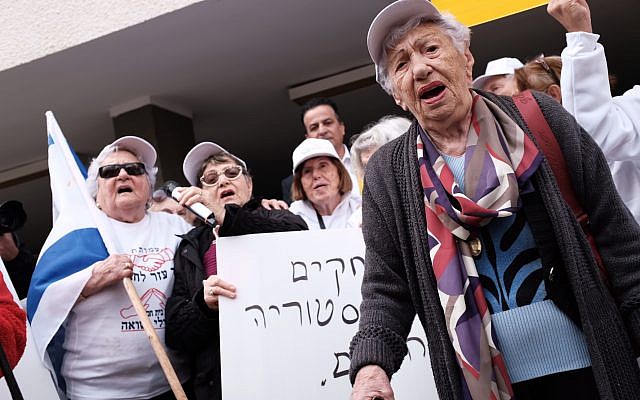 Holocaust survivors and activists take part at a protest at the Polish embassy in Tel Aviv, February 8, 2018. (Tomer Neuberg/Flash90)
Dozens of Holocaust survivors entered the Polish embassy compound in Tel Aviv on Thursday, waving flags and signs protesting the country’s bill making it a criminal offense to blame the Polish nation or state for the crimes of the Holocaust.
The demonstrators, who also included younger Israelis, entered the embassy compound. They briefly rallied outside the embassy building, with security guards trying to prevent them from entering, and also surrounded a diplomat’s car.

The protesters held up signs in Hebrew and Polish with such slogans as “No law will erase history” and “The Polish law spits in the Israeli people’s face.” One elderly woman held a sign saying “I still have nightmares because of what the Poles did.”
The protesters shouted “Nobody will forget what you did” at the diplomat inside the car, Ynet reported.
The rally was organized by the Yad Ezer La-Haver foundation, which runs a home for Holocaust survivors in Haifa. “We are here to voice our protest, and we promise it won’t be quiet,” said the foundation’s CEO Shimon Sabag. 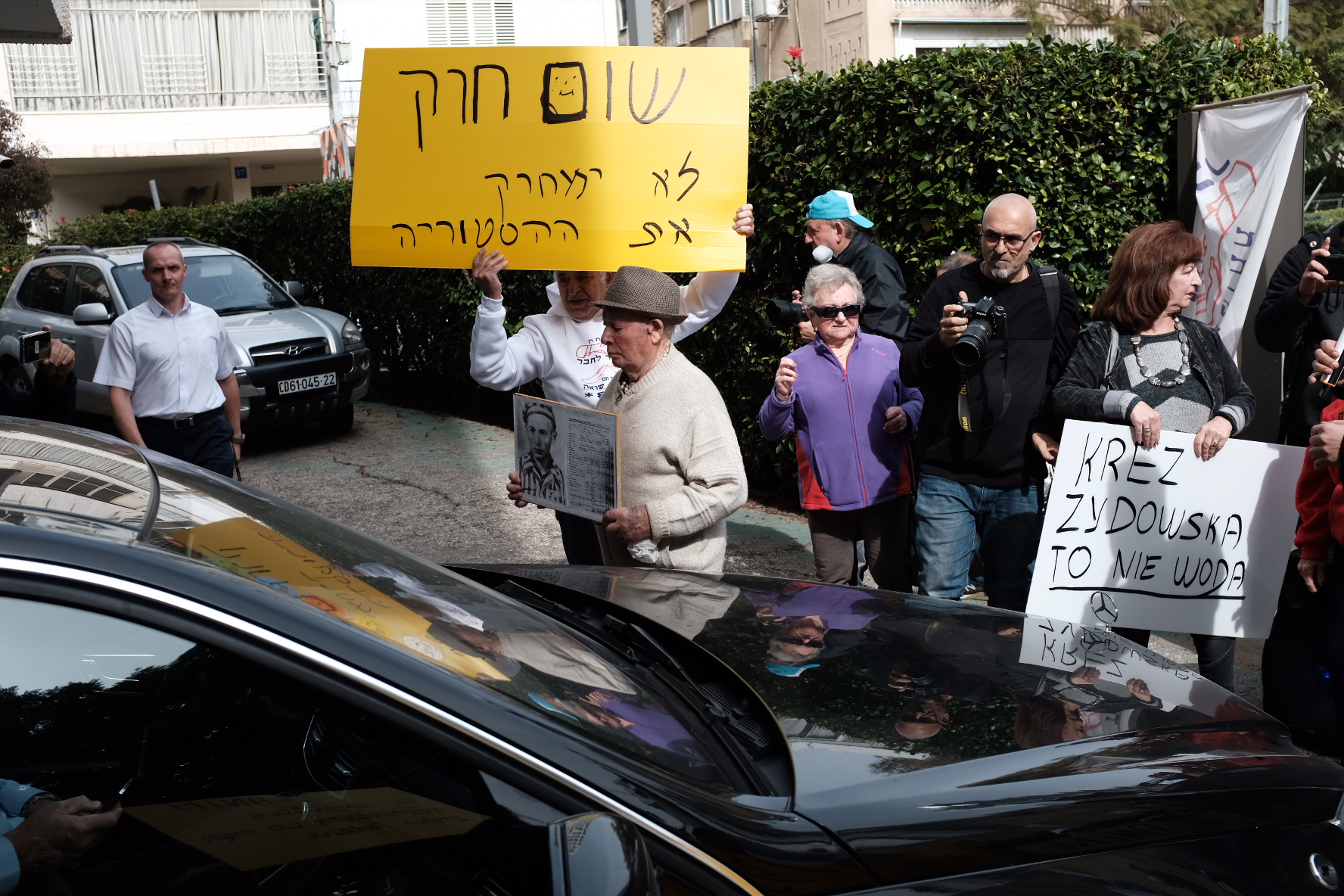 The demonstrators plan to erect a protest tent outside the embassy.
Some Holocaust survivors, many of whom are over the age of 90, used the demonstration to tell chilling stories about Poles mistreating them during World War II.
“Every Passover there were pogroms against us, so the Poles were anti-Semitic and received orders from the Polish church,” said 80-year-old Shaul Gorka, according to Ynet. “This law is absolutely terrible.”

“I only know one family in the whole village who helped me. All the rest didn’t care,” said 80-year-old Esti Lieber.
Holocaust survivor Shalom Shtamberg, 93, said much of his suffering had been caused by Poles. He said that after the Warsaw Ghetto was opened, “the SS and the Gestapo killed us and took us for hard work,” he said.

After escaping the ghetto as a 14-year-old and eventually being sent to the Auschwitz death camp, “there were so many Poles there too who beat us and caused us trouble,” Shtamberg added in tears.

Judith Rosenzweig, 88, said that in the camps, “the Poles around us saw what was happening because we were walking in lines, under rifles belonging to German and Polish soldiers. If one of us would exit the line, they would kill him.”
“The Poles just stood idly, didn’t do anything, just looked at the lines,” Rosenzweig continued. “We were without clothes on, or in torn clothes in freezing October — and we marched like that and they looked at us. Nobody objected and nobody helped.” 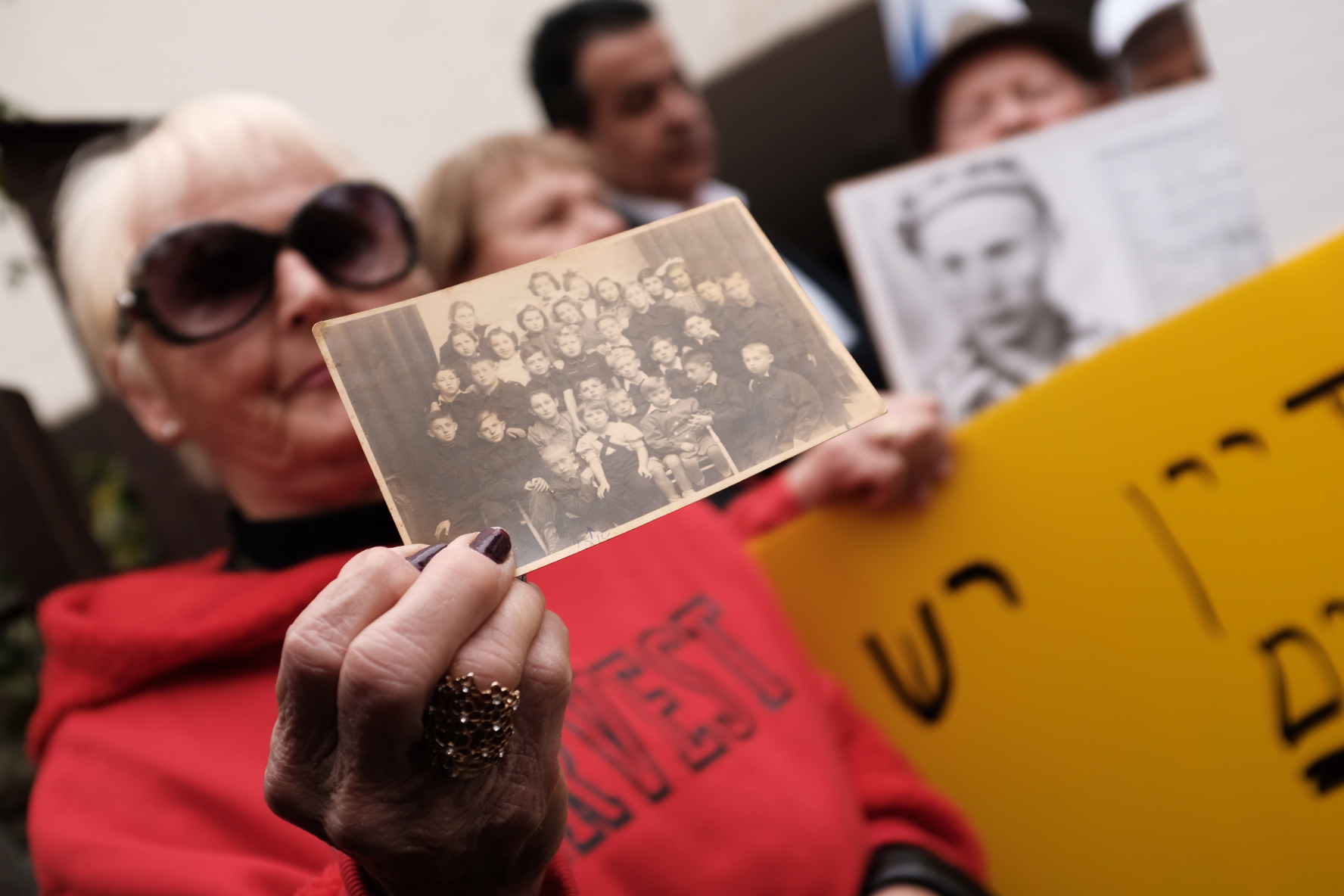 The Polish bill, which was signed into law Tuesday by President Andrzej Duda but has yet to receive final approval from the country’s Constitutional Court, has sparked a diplomatic crisis with Israel.
The legislation, proposed by Poland’s conservative ruling party, has angered Jerusalem, which says it will inhibit free speech about the Holocaust. The United States also strongly opposes the legislation, saying it could hurt Poland’s strategic relations with Israel and the US.
As currently written, the legislation calls for prison terms of up to three years for attributing the crimes of Nazi Germany to the Polish state or nation. The bill would also set fines or a maximum three-year jail term for anyone who refers to Nazi German death camps as Polish.
One key paragraph of the bill states, “Whoever claims, publicly and contrary to the facts, that the Polish Nation or the Republic of Poland is responsible or co-responsible for Nazi crimes committed by the Third Reich… or for other felonies that constitute crimes against peace, crimes against humanity or war crimes, or whoever otherwise grossly diminishes the responsibility of the true perpetrators of said crimes – shall be liable to a fine or imprisonment for up to three years.”

“You should be ashamed of yourselves. I escaped from Auschwitz and still cry every night because of what I went through there.”

Holocaust survivors protest Poland’s Holocaust law outside the Polish embassy in Tel Aviv, February 8, 2018. (photo credit: AVSHALOM SASSONI/MAARIV)
Dozens of Holocaust survivors protested outside the Polish Embassy in Tel Aviv on Thursday, demonstrating against a new law in Poland that criminalizes suggestions of Polish complicity in the Holocaust.
The demonstrators carried signs with slogans such as: “No law can erase history” and “Poles, we remember what you did.”

The demonstrators broke into the compound of the embassy singing Am Yisrael Chai, “The people of Israel live.”

Holocaust survivors protest at the Polish embassy in Tel Aviv against a law prohibiting the mention of Poland’s involvement in the Holocaust, February 8, 2018. (Avshalom Sassoni)
The protest was organized by the Haifa-based Yad Ezer La-Haver foundation, which runs a home in that city for Holocaust survivors.

The Jerusalem Post’s Hebrew-language sister publication Maariv reported that survivor Shalom Steinberg, 95, from Haifa, shouted: “You should be ashamed. I escaped from Auschwitz and weep every night from the things I went through there. Many people like me did not survive, and we will not forget that the Nazis massacred us on your Polish soil.”

What You Should Know Before Traveling To Indonesia
Sponsored by Connatix

Motke Lieber, another Holocaust survivor, added: “How can it be that such a law is passed when the Poles did not help us, and certainly not the Germans?”
Last week, just hours after the Polish Parliament passed the legislation, a group of Polish-born Holocaust survivors sent a letter of protest to Polish Prime Minister Mateusz Morawiecki.
“From first-hand testimony, we say that there were Poles who collaborated with the Nazis and even worse, when the war ended and the Jews returned from all sorts of places where they had lived and hidden during the war, the Poles were the ones who massacred them,” the letter said, adding that the Polish people must take responsibility, immediately cancel the law and compensate the few survivors who are still alive.
The protest is expected to grow, as survivors plan to set up a protest tent opposite the embassy and have called on citizens to sign a petition demanding that Poland repeal the law.
“We are here to voice our protest, and we promise it won’t be quiet,” said Yad Ezer La-Haver CEO Shimon Sabag.
Meanwhile, the International March of the Living announced it would continue holding its annual march in Poland.
Earlier this week, Jerusalem Deputy Mayor Yael Antebi called on Education Minister Naftali Bennett to cancel student trips to Poland and move the March of the Living to Jerusalem.
Ukraine’s Rabbi Moshe Azman also called on Bennett to suspend school trips to Poland, suggesting the March of the Living be held this year in Ukraine.
In a statement released Thursday, International March of the Living president Phyllis Greenberg Heideman said: “We believe it is our sacred responsibility to carry the torch of Holocaust memory, and we remain committed to teaching the importance of understanding the past as a means of protecting the future. Now, as much as ever, we believe our mission is of the utmost importance.”
March of the Living officials said that since the march’s inception, “Great progress has been made in the arena of Polish-Jewish relations and in the relationship between Poland and the State of Israel, a development the March of the Living has played an important role in.”
The organization expressed hope that the Israeli and Polish governments would find a way to solve the current impasse.