Martina Vaslovik  • Almost the entire orchestra I belong to took it and bragged about it.

Bert  Martina Vaslovik • Yeah, those who told me seemed to expect me to be impressed. I just fear for them now.

NordicBleu  Bert • Maybe those videos of the body bags and mass graves will finally be put to good use? I cannot believe people are so easily fooled to kill themselves?

Bert  NordicBleu • I guess we just gotta look at Jonestown.. They didn’t just kill themselves. They killed their children, too. And here we go.

extra salt Martina Vaslovik • I tell everyone taking the shot is retarded and anyone taking it lacks any pattern recognition. That way if they take it they don’t tell me and in either case it is not my fault.

NordicBleu Martina Vaslovik • Many in my own family. My uncle had a heart attack day after his first injection. Died a few days later. At least 1/2 my family got it. Intelligent people. Good people who trust goverment and pharma too much. Until you are injured, you think vaxciinnes are all good.

SurvivaLust • God Himself could peel back the sky tomorrow and scream from HEAVEN above that this “Vaccine” is not safe, effective or even a tool for preventing disease…..but it wouldn’t matter. These idiots walking around like dumb sheep will gladly roll up their sleeve because they have been fed a steady diet of sugar, video games, Hollywoodism and pro sports their entire lives…they believe the minstrel show ( BIG PHARMA ) and of course nobody seems to care…..as far as I am concerned if over 200 MILLION AMERICANS want to die from this JAB….go for it.

extra salt  SurvivaLust • Easy to feel that way until the TV gets a few friends and family to take it.You tell them all and they just have to do what TV tells them.All of them were the type of boomer-conservative that cannot be red-pilled no matter what. Most of them are good people who go to church and all that.

It’s not that they were careless and made dangerous vaccines without enough research. The research was to find out how to kill off the population without causing alarm and alerting people it was the vaccine.

The vaccine will make your immune system useless and you will die from an illness you would ordinarily fight off. And everyone will be dying at different times, it won’t be obvious and the deaths won’t be reported like they’re doing now with Covid to scare people into getting the vaccines.

People are being “herded” to “safety” by being told they will only be okay if they will take the vaccine when in fact it’s the vaccine that is going to kill you.

extra salt  mydogbeau • None of US know if this is the big one or if this is the test one for the big one, or really what their plan is with all of this.However you cannot convince me that the government is giving everyone an untested experimental vaccine.I think they already tested it and know exactly what to expect from it.

NordicBleu mydogbeau • They are using the HIV/AIDS playbook on a global scale. They did this in Africa. They used free health clinics and vaccines to destroy people’s immune systems.I have friends in Kenya who told me stories about the mass death of their families. It’s horrific.
Check out the movie Cold Case Dag Hammarskjold. It was free on Hulu. Might still be. Delves into the eugenics operation in Africa with HIV/AIDS. Covid 19 is the new HIV/AIDS genocide. People always say I’m crazy. They can’t believe there is such evil in the world.

Vincent • Something doesn’t smell right. Falsie says that, even if you’ve taken the vaccine, nothing changes. You have to wear 2 masks, social distance, and stay home. But the federal gov’t is desperate to get everyone to take the vaccine. I aint doing it.

Doper Dan • I am not surprised by these findings published in Microbiology & Infectious Diseases ISSN 2639-9458. Various groups of doctors have been warning about these vaccine side effects for months! 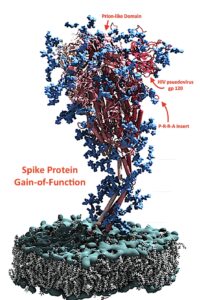 Ideas Time • Everyone pushing these fake vaccines should be charged with crimes against humanity.

fnbs  Ideas Time • which is why they made themselves exempt from any wrongdoing before rolling them out.. and people STILL lined up to take it…lol

Dry Clean Only  fnbs • They protected themselves from civil lawsuits when people are killed/injured by them; they didn’t make themselves legally immune from criminal prosecution.
BIG DIFFERENCE (thank God).

NordicBleu  Dry Clean Only • Anyone who actually believes the current system will provide you any justice is fooling themselves.
They will use Patsys as they alwasy do and continue on with their reign of terror. The public will eat it up, those who survive this mass genocide, and be back on the phone scheduling their next flu shot.
2020 allowed me to understand that the most intelligent people are generally the most brainwashed and clueless. They are obedient. The rest of the public? Even members of my own family? They are living in a different reality. A Jim Jones Kool-Aid cult.
They believe anything the government and media tells them.

TheMagician  Leftarefascists • There is nothing worse than a COVID Karen.

Kekapukainohea “Nohea”  TheMagician • Sure there is: being immune and still have your civil liberties explained away

Dry Clean Only  TheMagician • Isn’t it interesting that they all seem to be women? Have any men screamed at any of you bec. you weren’t wearing a mask or whatever? I’m sincerely wondering why that is.

NordicBleu  Dry Clean Only • Shockingly, yes. An older gentleman started bitching about the arrows at Kroger and how I wasn’t following them. I thought to myself, this older man is scared to death of the flu and cold acting like a f-cking aisle nazi at the grocery store. That being said, most of the cult members are women. Many in my own family. I’m a woman but saw through the BS from day one. Why am I different? Why makes the difference between us and the cult members?

Very true. Why are most cult members women? Look at Jonestown, and the Manson family. There are more female scientologists than male. Ever asked why? The women seek protection and provision. The cult leaders are always men, and they get to have many sexual partners. It was ever thus.

Why do women marry older less virile men. Why don’t men seek out older women, despite such women having much more resources than they do?

justanotheridea NordicBleu • As a woman who has refused to wear a mask since day one in Liberal Washington State I was expecting to be confronted by a bunch of women. However, I have only been approached by men. I tell them I can’t. They usually say why? I tell them I trust God, I have common sense and an immune system.

Davina Janes  justanotheridea • Both my comments above are not universal. Life is complex. My view is from 60,000 ft. Well done you for having the smarts to be an individual, and to think for yourself.

Davina Janes  Dry Clean Only • Women are much more prone towards voting for Fascism. Look at the old films of who supported Hitler, Mussolini, Trotsky, Lennin, Emperor Hirohito, Stalin etc. Why is this? It’s hardwired genetics. Men want to sow their seed, and have many options in their partners. For that you need options and freedom. Women seek a strong provider and protector. For that you need a benevolent dictator, who promises protections in return for your freedoms. It is how the world is. Of course, this not for each individual, but the 60,000 foot view says this is exactly why. Women will give up anything in return for protection and provision. Men will give up anything in return for freedom. (which women marry socially downwards – hardly any). Soy milk, unlimited free pornography and propaganda have left the vulnerable male population confused. The promise of security and advancement have left women trading out their nuclear family for a strong fascist leader and security. Therefore, when women see others not complying with their government, they get upset, as it threatens them psychologically. Also, women manage families, and therefore seek consensus among everyone to be happy. Men are happy with many alternative views as that leads to freedom, and options for partners. The fascists really are very good at understanding human psyche, and how to turn it against us. “People who give up their freedoms for security, end up with neither”. And, as a bonus, “It is easier to foll people, than it is to convince them they have been fooled”.Too late for me. I was vaccinated. But I am very old, and am done with this planet.

Davina Janes  Davina Janes • One more point. Women seek consensus, not the truth. It is how peace is achieved in families. It’s called compromise. It sounds good. But. If I say 2+2=4, and you say 2+2=5, then to achieve consensus, the answer would be 4.5. But 4.5 is as equally wrong as 5. We are being played so criminally, it is actually quite fascinating to watch.

Davina Janes SurvivaLust • Orwell’s 1984 was a book that worried me when I was young. As Eric Blair intended. Little did I know that most saw it as a blueprint. My conclusion is that people don’t actually want freedom. They really don’t. Most want to be told what to do, so they can experience the endorphins of compliance, and the virtue that comes with it.

SurvivaLust  Davina Janes • Interesting position. I often considered that perhaps the reason why humanity is bent on dominance is because they need to feel nurtured and gain some sort of reassurance knowing they don’t have to worry about their lives…some will gladly exchange their freedom for security. I believe Ben Franklin warned us about 1984.

StarTripper • I am not surprised by the findings. I am surprised they were made public. This along with the CDC study that indicated wearing masks does more harm than good. If the bad guys were truly in control this would not have happened.